Do tuition increases adversely affect enrollment in independent schools? Only in rare instances, finds a conclusive new study. In the third major research effort of its kind, a study of “tuition price elasticity” in independent preK-12 schools finds that there is statistically no association between changes in tuition pricing and enrollment demand. In other words, regardless of whether or how much a school increases tuition in any given year, a school has an equal chance of enrollment growing or shrinking.

What does influence the family’s decision to enroll? The perceived value the schools provide, the study authors indicate. By increasing tuition, schools can expand programs and raise faculty salaries, thereby strengthening quality and enrollment.

The findings were released at the 2016 NBOA Annual Meeting in Washington, D.C., the largest-ever professional development gathering for independent school CFOs and other business and operational leaders.

The study builds on much smaller studies, released in 2006 and 2011, that first hypothesized the absence of a relationship between tuition price and enrollment. Those findings were controversial, and, then as now, schools are cautioned to consider them in the context of their specific location, mission and other circumstances. “The last time this study was conducted was immediately following the recession,” said Jeff Shields, NBOA’s president and CEO. “It was critical for NBOA, ISM and Measuring Success to join forces to help heads of schools, business officers and trustees understand tuition price elasticity in today’s economic environment. The research, once again, indicates that changes in tuition do not have a direct link to changes in enrollment demand.”

Other survey results include:

Despite these findings, study authors say schools should use caution in interpreting the data.  “As tempting as anecdotally based decisions are at the board meeting, Measuring Success has always believed that data-driven decision making around critical hypotheses is vital in weighing questions that significantly affect schools’ enrollment and financial sustainability. It is that focus which led us to develop and launch this methodology around price elasticity of demand in 2006,” said Dr. Harry Bloom, SVP of Client Solutions at Measuring Success.

“We recommend based on the findings that all schools keep their primary focus on driving their quality, not limiting their price, to maximize net revenues,” said Shields. Terry Moore, executive consultant at ISM, agrees. “ISM continues to see schools successfully drive value instead of price. While the continued push to increase tuition is difficult, we believe that value is the variable that schools can truly control, and the variable by which they can differentiate themselves in competitive markets.” 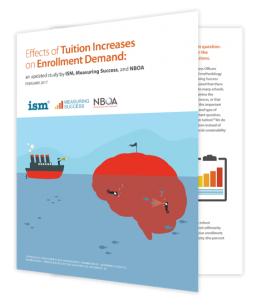 ISM, based in Wilmington, Delaware, provides management support for nonprofit independent schools in the U.S. and abroad. Founded in 1975, ISM is committed to the advancement and viability of schools by combining extensive research, proven management techniques and personalized service. Learn more at isminc.com.

NBOA, based in Washington, D.C., is a nonprofit membership association focused exclusively on fostering financial and operational excellence among independent preK-12 schools. Founded in 1998, NBOA’s membership includes more than 1,300 schools from around the country and 15 countries around the globe. Learn more at nboa.org.