GAIN INSIGHT INTO YOUR FACULTY'S EXPERIENCE TO IMPROVE SCHOOL CLIMATE

Independent school leadership commonly have some level of consternation when deciding to take an inward look at themselves by surveying key stakeholder groups. Opening itself up to constructive and even potentially negative feedback from faculty members, parents, students, and alumni is often a scary proposition, particularly if not done consistently.

From the stakeholder perspective, independent school faculty members commonly have more reservations than other school stakeholder groups about providing sensitive feedback to school leadership via a survey, as participating in a confidential process is paramount to them in buying into the process. To respond honestly, faculty members want to be sure that school leadership can only view the aggregate results and does not have access to even anonymized individual responses since the relatively small pool of responses among known colleagues can make maintaining confidentiality difficult. After all, the employee-supervisor relationship is very different and generally more sensitive than the relationship with a consumer.

"School Climate is a leading factor in explaining student learning and achievement."
--Frontiers in Psychology

But when school leadership takes the important step to really listen to its faculty, and the faculty members trust the feedback process, participating in a faculty survey where results can be benchmarked across similar schools is a powerful tool to help improve school climate.

Among the 15 Jewish Day Schools that have participated in the Measuring Success Faculty Survey in the last year, Joseph Kushner Hebrew Academy/Rae Kushner Yeshiva High School and Yavneh Academy are strong examples. (And based off of this success, Measuring Success is now building cohorts among other types of independent schools.)

From the outset, Kushner leadership prioritized the importance of the survey to its faculty members in various meetings and constantly stressed its confidential nature with administration and analysis led by Measuring Success. 122 of its faculty members responded to the survey, representing a 94% response rate—far exceeding the 80% response rate goal. The leadership then worked to understand, interpret, and act on the survey results.

“For us, some of the differences in faculty satisfaction and perspective came out when looking across divisions,” said Rabbi Eliezer Rubin, Head of School. “There was a need to dissect the community throughout the lens of each division since each division is so different.”

Ways in which school leadership has since acted on the survey findings include moving from frontal reporting in faculty meetings to more time spent in working groups and celebrating various levels of school seniority milestones at the end-of-year faculty meeting. These initiatives represent relatively simple, but meaningful and impactful, gestures that only came about because leadership took the time and effort to hear out its faculty members.

“It was palpable that the teachers appreciated being surveyed, particularly because we survey parents regularly,” Rabbi Rubin said. “It is critical that authentic feedback inform our perspectives.”

After hearing positive experiences from colleagues who participated in the Faculty Survey, Rabbi Jonathan Knapp – Head of School at Yavneh Academy – felt like the timing was right to elicit comprehensive feedback from faculty. In May 2019, 83% of Yavneh faculty completed the survey, which allowed the leadership team to digest findings in the summer and plan effectively for this year. 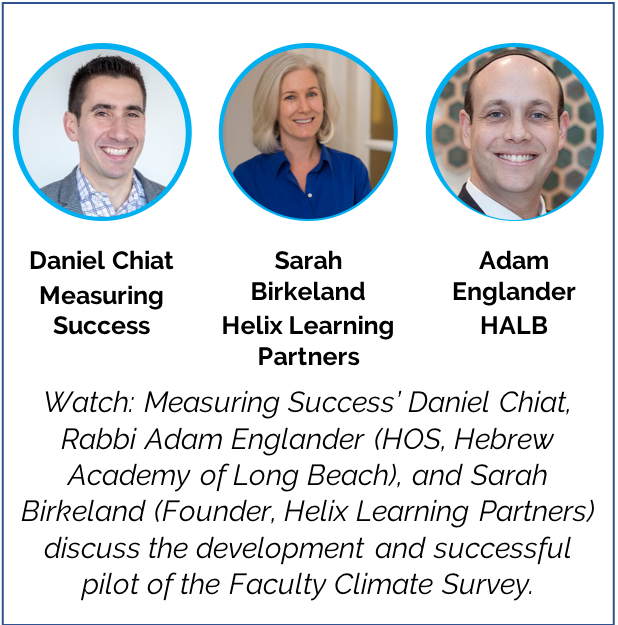 “The Faculty Survey was a great re-charge and served as an energizer to move ahead,” Rabbi Knapp said. “Nothing that came out of that was utterly shocking, but there is a difference between relying on anecdotes and having real data. Data is a great way to seize the reins and move ahead in areas we may have been stuck.”

Survey results were delivered to each of the three divisions in separate faculty meetings, which led to constructive discussions about the norms and culture Yavneh aspires to achieve. Across divisions, a year-long initiative developed around implementing positive student discipline that emerged strongly from teacher interest.

“The survey results directly informed our direction in professional development for the staff and faculty this year and for future years,” Rabbi Knapp said. 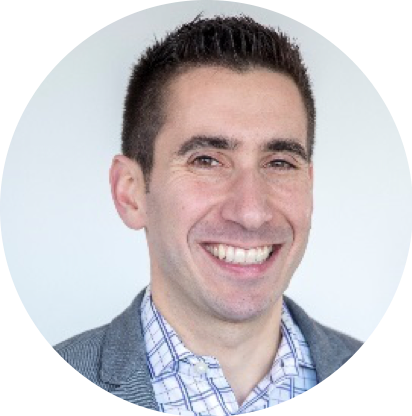 Taken by more than 30,000 parents at schools across North America, the survey helps to identify factors that impact enrollment and retention by understanding how current, prospective, and past parents perceive the value of your school.

Designed specifically to tap into student insights and understanding so that your independent school can act on the student body’s collective voice. Third-party administration maintains security and confidentially.